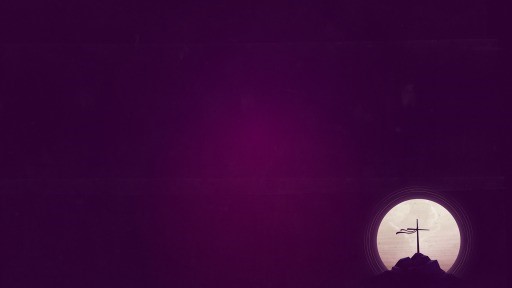 16 …So they took Jesus, 17 and he went out, bearing his own cross, to the place called The Place of a Skull, which in Aramaic is called Golgotha. 18 There they crucified him, and with him two others, one on either side, and Jesus between them. 19 Pilate also wrote an inscription and put it on the cross. It read, “Jesus of Nazareth, the King of the Jews.” 20 Many of the Jews read this inscription, for the place where Jesus was crucified was near the city, and it was written in Aramaic, in Latin, and in Greek. 21 So the chief priests of the Jews said to Pilate, “Do not write, ‘The King of the Jews,’ but rather, ‘This man said, I am King of the Jews.’ ” 22 Pilate answered, “What I have written I have written.”

23 When the soldiers had crucified Jesus, they took his garments and divided them into four parts, one part for each soldier; also his tunic. But the tunic was seamless, woven in one piece from top to bottom, 24 so they said to one another, “Let us not tear it, but cast lots for it to see whose it shall be.” This was to fulfill the Scripture which says,

“They divided my garments among them,
and for my clothing they cast lots.”

28 After this, Jesus, knowing that all was now finished, said (to fulfill the Scripture), “I thirst.” 29 A jar full of sour wine stood there, so they put a sponge full of the sour wine on a hyssop branch and held it to his mouth. 30 When Jesus had received the sour wine, he said, “It is finished,” and he bowed his head and gave up his spirit.

All four Gospel writers record the crucifixion of Jesus. I would encourage you to read the account of each of the four books. It is truly incredible to read what Jesus Christ endured and suffered as he was hung on a cross to die.

When we come to these passages, we must reflect on the seriousness of the matter. It is a reminder of the ugliness of our sin for it is for this reason that Jesus had to die. He went to the cross as a sacrifice for us so that we could be saved. It took the infinite worth of the blood of Christ to pay our debt. We should never treat sin as a small matter.

Christ’s death at Calvary also reminds us of how great our God loves us, despite our sin. He has gone to the greatest lengths to rescue us. The Father gave his Son for us. That is incredible to think about. Why would the Father do that? Love.

As we spend this Good Friday thinking about Jesus’ death at the cross, let it serve as a reminder of the serious nature of sin and let it also remind us of God’s great love for us.

If you are wondering why Jesus had to die, know that the Bible teaches us that all people are sinful and deserving of condemnation. There is nothing that we can offer to make up for our sin. We cannot buy forgiveness or do religious rituals or do enough good deeds. But God has done something for us. He gave his Son, Jesus Christ, to pay the debt for us by going to the cross and dying as a sacrifice for us. If we repent of (turn away from) our sin and trust in what Christ has done for us (and not trust in our own merits), God promises to forgive us and give us new life. Would you do that as you think about why Jesus had to die?