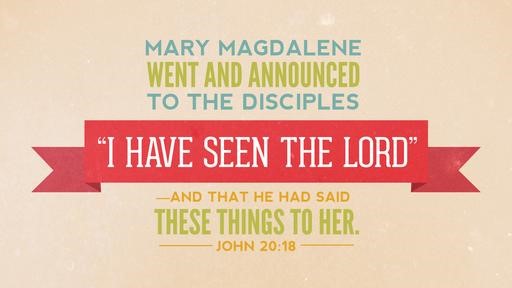 11 But Mary stood weeping outside the tomb, and as she wept she stooped to look into the tomb. 12 And she saw two angels in white, sitting where the body of Jesus had lain, one at the head and one at the feet. 13 They said to her, “Woman, why are you weeping?” She said to them, “They have taken away my Lord, and I do not know where they have laid him.” 14 Having said this, she turned around and saw Jesus standing, but she did not know that it was Jesus. 15 Jesus said to her, “Woman, why are you weeping? Whom are you seeking?” Supposing him to be the gardener, she said to him, “Sir, if you have carried him away, tell me where you have laid him, and I will take him away.” 16 Jesus said to her, “Mary.” She turned and said to him in Aramaic, “Rabboni!” (which means Teacher). 17 Jesus said to her, “Do not cling to me, for I have not yet ascended to the Father; but go to my brothers and say to them, ‘I am ascending to my Father and your Father, to my God and your God.’ ” 18 Mary Magdalene went and announced to the disciples, “I have seen the Lord”—and that he had said these things to her.

Mary stood weeping at the tomb wondering where Jesus’ body had gone. She was in such distress that she did not even notice the presence of angels. When they spoke to her, she simply answered without regard to the fact that they were heavenly beings. Then Jesus spoke to Mary, but she failed to recognize him also, thinking he was the gardener. Mary was in deep grief over the death of Jesus and now the disappearance of his body. She was unable to really see what was going on around her.

Jesus then said, “Mary.” At that point, she recognized Jesus and responded, “Rabboni!” In English, she said, “My Teacher!” Jesus was risen and was standing before her! Her grief was turned from sorrow to joy. Surely Jesus would be with her from now on. However, Jesus told her, “Do not cling to me, for I have not yet ascended to the Father.” Jesus was with her now, but it would only be temporary. He would soon ascend to heaven and the Holy Spirit would be poured out in his absence. Things were changing. Now was the time to gather the disciples and let them know that Jesus was risen and that he would soon be departing and they would take the message of the resurrection to the world.

Jesus’ ascension marked a major change in how God works in and through his people. Christ had been physically present with his people, but now he would soon be gone. In his place, the Holy Spirit would be with the people of God to empower them as witnesses and to lead them into all truth. This means that you and I, fellow Christian, have this same Spirit working in us as we live in this world. And this means we are equipped for everything that God has called us to do, which is centered on proclaiming the Good News that Jesus is alive again!