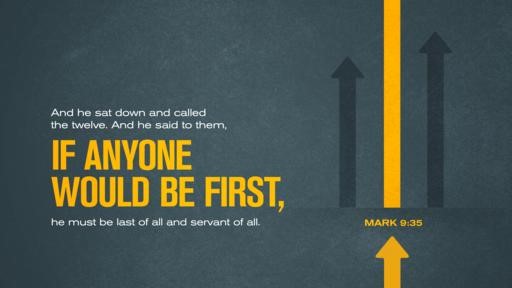 33 And they came to Capernaum. And when he was in the house he asked them, “What were you discussing on the way?” 34 But they kept silent, for on the way they had argued with one another about who was the greatest. 35 And he sat down and called the twelve. And he said to them, “If anyone would be first, he must be last of all and servant of all.” 36 And he took a child and put him in the midst of them, and taking him in his arms, he said to them, 37 “Whoever receives one such child in my name receives me, and whoever receives me, receives not me but him who sent me.”

The disciples had been arguing with one another about which of them was the greatest. The argument stemmed from their continued misunderstanding of Jesus as the Messiah. They were still failing to understand that Jesus’ kingdom was not a geopolitical kingdom. He had not come to save the Israelites from the Romans. He had not come to reestablish Israel as a great power like it had been in the days of King David. He had come to deliver the Israelite people, and all people, from bondage to sin and death. Jesus was a Messiah who was going to die for his people.

The disciples were expecting Jesus to take the throne and put them into prominent positions. This thinking is why they argued over which of them was the greatest. They wondered who Jesus would entrust with the most power in his kingdom.

Jesus explained that leadership in his kingdom was not about promoting self. In fact, true leadership is self-sacrificing. A true leader looks out for others and does whatever is necessary to help others flourish. This is exactly what Jesus did for mankind. He gave up his own life so that those who trust in him can flourish. He went to the cross to take the sins of the world on himself and give his righteousness to all who would believe. And he has called on his followers to lay aside their own lives for the sake of others and for the sake of the gospel.