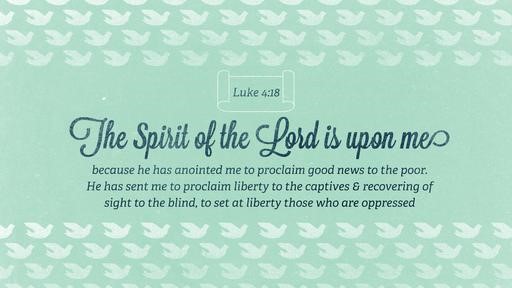 16 And he came to Nazareth, where he had been brought up. And as was his custom, he went to the synagogue on the Sabbath day, and he stood up to read. 17 And the scroll of the prophet Isaiah was given to him. He unrolled the scroll and found the place where it was written,

18 “The Spirit of the Lord is upon me,
because he has anointed me
to proclaim good news to the poor.
He has sent me to proclaim liberty to the captives
and recovering of sight to the blind,
to set at liberty those who are oppressed,
19 to proclaim the year of the Lord’s favor.”

20 And he rolled up the scroll and gave it back to the attendant and sat down. And the eyes of all in the synagogue were fixed on him. 21 And he began to say to them, “Today this Scripture has been fulfilled in your hearing.” 22 And all spoke well of him and marveled at the gracious words that were coming from his mouth. And they said, “Is not this Joseph’s son?” 23 And he said to them, “Doubtless you will quote to me this proverb, ‘ “Physician, heal yourself.” What we have heard you did at Capernaum, do here in your hometown as well.’ ” 24 And he said, “Truly, I say to you, no prophet is acceptable in his hometown. 25 But in truth, I tell you, there were many widows in Israel in the days of Elijah, when the heavens were shut up three years and six months, and a great famine came over all the land, 26 and Elijah was sent to none of them but only to Zarephath, in the land of Sidon, to a woman who was a widow. 27 And there were many lepers in Israel in the time of the prophet Elisha, and none of them was cleansed, but only Naaman the Syrian.” 28 When they heard these things, all in the synagogue were filled with wrath. 29 And they rose up and drove him out of the town and brought him to the brow of the hill on which their town was built, so that they could throw him down the cliff. 30 But passing through their midst, he went away.

As Jesus returned to Nazereth, where he had been brought up, he had already begun his public ministry in Capernaum. When he arrived in Nazareth, he already had a reputation as a healer due to the works he had performed in Capernaum. This is likely why he was invited to speak at the synagogue in Nazareth.

Jesus read from Isaiah 61 then sat down to teach. Was this reading scheduled to be read on this day? Did Jesus select this passage on his own? We do not know, but it is an incredible passage concerning the ministry of the Messiah. So, when Jesus told the people that the passage had been fulfilled in their midst, he was making a claim to be the Messiah. They wondered how this could be possible since they knew he was the carpenter’s son.

Jesus predicted that the people would call on him to perform in Nazareth the healings he had done in Capernaum. After all, should not the hometown folks benefit if anyone is going to benefit? In response, Jesus reflected on incidents in the Old Testament where God’s favor had fallen on select people, even non-Jews, while many others had not received such grace. In saying this, Jesus was telling the Jewish people that his ministry was not solely, or even primarily for the Jewish people, but for both Jew and Gentile. As a result, the people wanted to seize him and thrown him off of a cliff, but he escaped from them.

How do we respond when others are shown grace? How would you feel if the neighbor you do not get along with, or the co-worker who is always causing problems, or your worst enemy showed up at church? How would you feel if they turned to Christ in saving faith? Would you rejoice? Or, would you wonder how God could show favor to “those people”? Let us remember that Jesus came to save the lost, whoever they may be, and let us give thanks for the grace we have received as well as the grace God shows to others.

**Read through the Life of Christ in 2019 by following along with Shaped by the Word. Just subscribe to this page and be sure to read along every day!